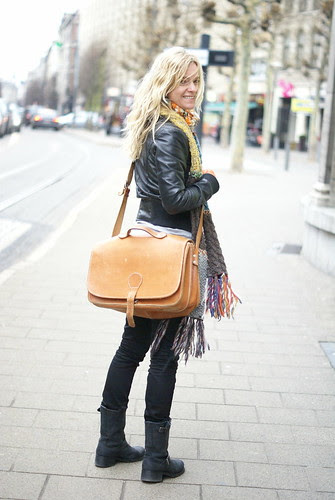 Last weekend I visited Antwerp and accidentally stumbled on a vintage schoolbag, similar like I used to have in high school.

Initially I thought it was a remake, because I was at Zappa, a shoe store and not in some kind of second-hand shop, but when I had a closer look I discovered the name of the former owner. Her name 'Ruth Neirinck' was handwritten with marker on the inside. I read it aloud and liked the Belgian sound of it. (Why is it so contagious to talk with a Flemish accent?)

I was thinking where my old schoolbag must have remained and all of a sudden felt so sorry that I didn't keep my own schoolbag.

Ruth's schoolbag still is in perfect condition so I bought and renamed it, like the saleslady suggested.